Rome: the city of delicious food, historic sights, and cute Italians. How could anyone possibly not have the best day ever there?! Hopefully, reading my silly mistakes will keep you from having anything short of an amazing visit!

1. Don’t Go In The Middle Of August 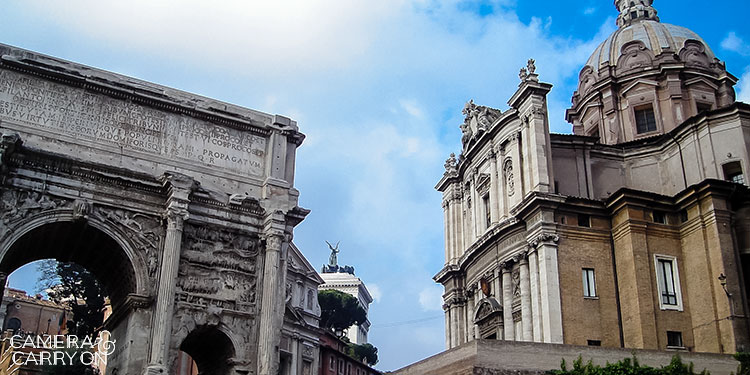 What comes to mind when you think August? Snowmen, jackets, and mittens? Of course not. Why? Because it’s fucking hot. August in Rome feels like the sweaty armpit of a 500 pound man who has just completed a triathlon. To make things even worse, the city will be crawling with tourists. Even though you are, in fact, one of these tourists, they’re still super fun to complain about. But seriously, do yourself a favor and don’t go between June and August.

This is a good general rule for life: Don’t try to squeeze too many groceries into your shopping bag — it’ll break. Don’t try to squeeze yourself into last year’s too-small-skinnyjeans — they’ll probably rip, and if they don’t you’ll wish they had when you see the unflattering pictures on Facebook. And most importantly, don’t try to squeeze everything there is to see in Rome into one day — it just can’t be done.

This kind of goes along with the whole “Don’t squeeze it all in” thing, but seriously… you’re in Rome, one of the most famous cities in Italy. And you know what Italy is also famous for? Italian food, aka God’s gift to the world. Isn’t there a part in the bible that says something like, “And on the 5th day he hath made Italian food!”?? Anyways, if you’re trying to squeeze a lot in then you’re probably wanting to grab a quick bite to eat before running off to the Vatican or Colosseum. If that is the case then 1.) you should have listened to number two and 2.) take the extra 30 minutes to sit down and have a nice meal. Maybe even research restaurants ahead of time so you don’t waste time searching for a good place, or worse, end up in a dump like we did.

Don’t. Rent. A. Vespa. My travel bud, Johanna, and I had never been to Rome, hence why we made so many rookie mistakes, but this, perhaps, was the worst of them all. If you’ve never been to Rome, as we hadn’t, then let me let you know one of the most important things we discovered: Roman streets were designed by insane people and insane people still drive on them today. There are no clear lanes, no warning that you’re about to have to decide between 5 different ways at the fork in the road, no U-turns, and basically no rhyme or reason to anything. You may be under false pretenses that renting a Vespa in Rome is a bucket list item after watching Hillary duff do it with Pablo in the Lizzie McGuire Movie, and I hate to be the one to shatter this dream of yours, but if you value your life, DO NOT RENT A VESPA. Also, look what a jerk Pablo turned out to be… Clearly we should not be trusting Lizzie’s judgement on all things Rome.

Seriously, don’t be late. Again, this may have something to do with the aforementioned number two, but when they say the Vatican closes at 4:00, they mean the Vatican closes at 4:00. Johanna and I found this out as we sprinted toward the Vatican clothed in maxi dresses and sweaters in the August heat because our Vespa broke down a mile from our destination as hundreds of Italians, clearly used to the frantic tourists, cheered us on with, “You’ll make it, Bellas,” and “One more minute, you’re so close.” Yes, it was as horrible as it sounded and yes, we did make it. We proceeded to then run through the Vatican, briefly glancing at things as we passed, to make it to the Colosseum before it closed at 7:00. Not only did we not make it, but we also should have scratched the Colosseum idea and sprung for a Vatican tour. Rule 5 1/2? Don’t run through the Vatican. Take your time! Appreciate it!

6. Don’t Forget To Laugh At Yourself

After a sweaty day of Roman traffic, glimpses of the Vatican, missing the colosseum, rude Italians, a malfunctioning Vespa, bad/overpriced food, and a closed-for-construction Trevi fountain, we finally decided to crawl our way back to return the Vespa to the rental store. The owner had told us that it would probably be closed by the time we got back and that we just had to leave it parked outside with the other Vespas, keys locked in the trunk. Simple enough, right? Johanna handed me our two helmets, jackets, purses and miscellaneous other things to hold as she parked our stupid metal deathtrap in the only available spot, at the top of the hill. I watched, seconds later, in complete horror and disbelief as the Vespa pried itself free from her hands and made its way down the hill, knocking over every other Vespa in the line. For miles around people turned to look what had made this terrible crashing noise as mirrors flew from the handles of several of the 30+ Vespas and Johanna and I looked on in helpless disbelief. The one man who came to help us pick them back up later asked us for money. Johanna began to cry and, call it a mental breakdown or exhaustion, but for whatever reason I started to laugh. She eventually joined me in my hysteria and we laughed our way to the hostel before collapsing into bed.

Now get out there and be awesome.